OUR GUIDE : TONY TUCKWELL author of New Hall and its School: A True School of Virtuous Demeanour (2006)

Our tour guide and our very own Branch Committee Member was thorough, freshly informative and enlivened us with dates to satisfy and sprinkled all with goodly tales, wit and good humour. We were properly entertained, but more than that he shared with us the fruits of a recent Time Team special dig and a new signficance for the Tudor period involving that magnificent coat of arms with its young and golden rose-shoots sprouting from the top of the heraldic pomegranate. So it’s a proper royal palace for Queen Catherine and her young to grow up in away from the dangers to health of other royal sites?  I’m sold.
And as for that very young and sharp interrogator who went on another of your tours, with his interpretation of the Dragon Statue, ( a ‘griffin’ no less based no doubt on wide reading in Harry Potter), I’m with you on this winged monster with four legs. But I’ll have to get out my Boutell’s ‘English Heraldry’ book and do my homework – no bad thing.
Thank you Tony for treating us. Why don’t we do more Essex Branch tours when we get so lucky with weather and guides!

Here below is the story and image of the stained glass that once graced the New Hall site but is now in St.Margaret’s Church, Westminster: 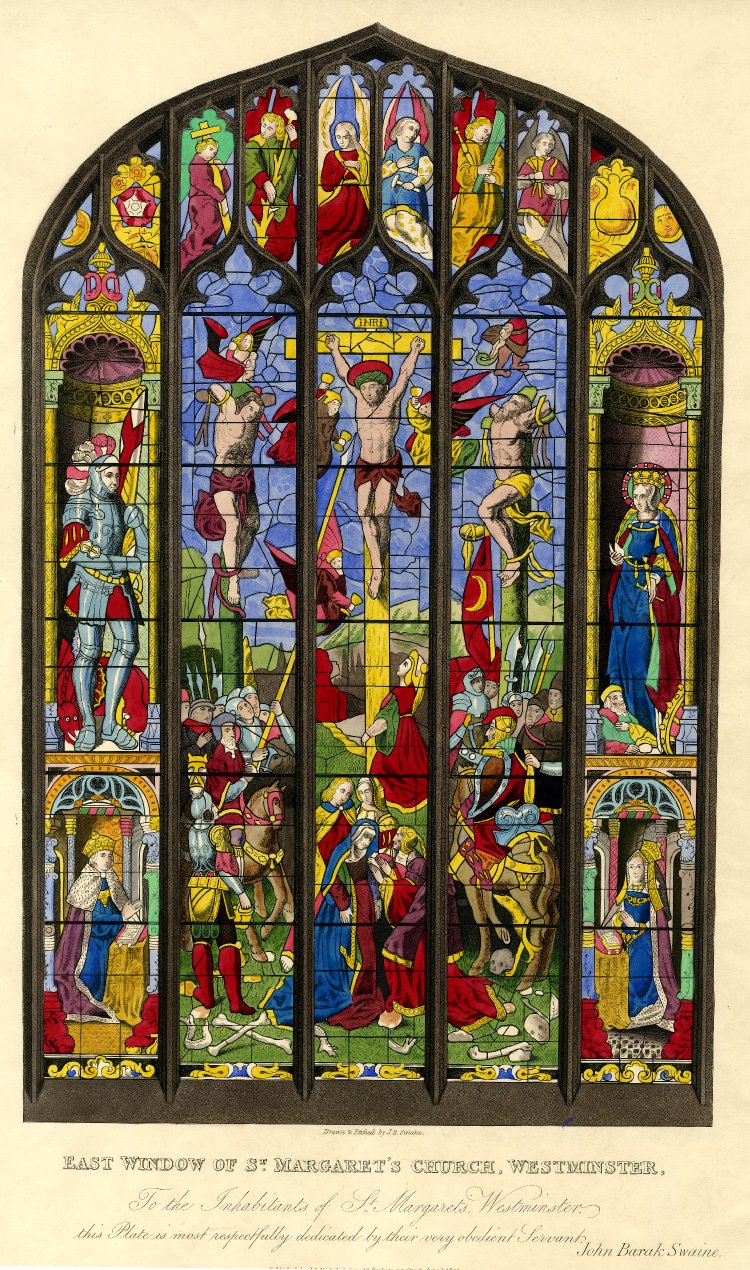 Courtesy of The British Museum
The beautiful stained glass window which dominates the east side of St Margaret’s Church can best be described as ill-timed.  It was created in Holland around 1526 to celebrate the marriage of Henry VIII to Catherine of Aragon. But by the time it had been finished Henry had become besotted with Anne Boleyn. Henry is depicted in saintly contemplation in the panel at the bottom left of the window while on the right hand side of the window Catherine, against an almost identical background, is also deep in prayer. Both appear to be looking at the Crucifixion which occupies the whole of the central panel of the window.


When Henry’s marriage was annulled in 1533 the window could no longer be placed in Westminster Abbey where it had been intended to memorialise one of the great royal marriages intended to bring peace to the warring nations of Spain and England. Instead it embarked on an extraordinary series of journeys like no other stained glass window.

At first, it was dispatched to the ancient religious house of Waltham Abbey in Essex to be out of sight and out of mind. There it remained until the Dissolution of the Monasteries when it became a double embarrassment because of its association with a doomed Royal marriage and the imagery of a discarded Catholic religion.

Somehow it survived and was transferred to a private chapel at New Hall in Essex where its Catholic symbolism would be less noticed. It then came into the ownership of General Monk, a Royalist who also served with distinction under Cromwell, who apparently buried it to hide it from fanatical Puritans.

It was subsequently purchased by Edward Conyers of Copped Hall in Essex where Mary Tudor was imprisoned and where Shakespeare’s A Midsummer Night’s Dream was first performed. Its Cook’s Tour continued when Conyer’s son sold it in 1758 to the inhabitants of St Margaret’s for 400 guineas.

Then it starts getting complicated. The Dean and Chapter of Westminster regarded it as Popish imagery and started a lawsuit seeking its removal. The dispute lasted seven years. It was the religious equivalent of Charles Dickens’ perpetual law suite in Bleak House, Jarndyce v Jarndyce. Fortunately for us all, the law suite failed and the stained glass window can now be enjoyed by all, hopefully in perpetuity.

The cost of our tour was £5 per person split between The Alzheimer’s Society and the Acorn Village Trust at Mistley which supports adults with learning disabilities.